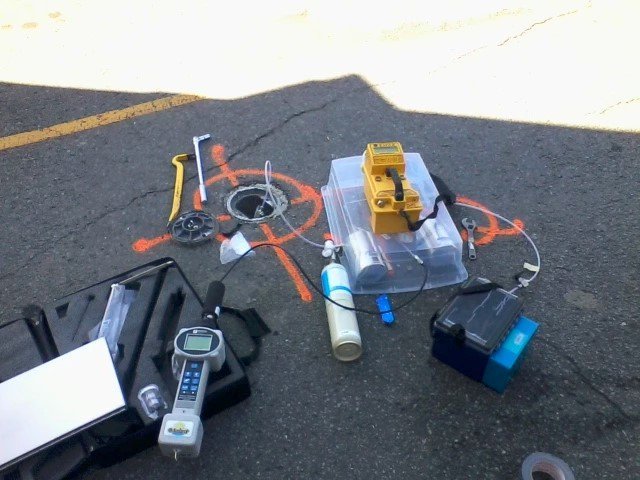 Abs: Active soil gas methods consist of the withdrawal and analysis of the soil gas from the subsurface. These methods give concentration data (for example, μg/m3) for COCs, which can be directly compared to risk-based screening levels or used in predictive models.

Active soil gas methods consist of the withdrawal and analysis of the soil gas from the subsurface. These methods give concentration data (for example, μg/m3) for COCs, which can be directly compared to risk-based screening levels or used in predictive models. Two techniques are most commonly used to install soil gas probes to collect external active soil gas samples – driven probe rod and burial of soil gas sampling tubes. 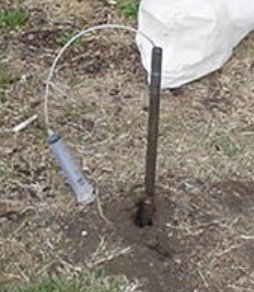 This method consists of the insertion of a hard rod (probe) driven to a target depth, collection of soil gas through the rod while it is in the ground, and subsequent removal of the rod. Typically, probes are constructed of hollow steel rods with an external diameter ranging between 12.5 mm and 50 mm (0.5 inches and 2 inches). Small diameter inert, replaceable tubing runs down the center of the drive rod to eliminate potential contamination from the inside of the rods. The probes can be driven by hand methods, direct-push systems, or with larger drill rigs using a wire-line hammer. Probe installation can be difficult in over-consolidated or coarse-grained soils. A surface seal is usually used, but this seal does not prevent cross-flow at greater depths, so driven probes are most applicable in relatively uniform moderate to high permeability materials (generally not in low permeability soils). 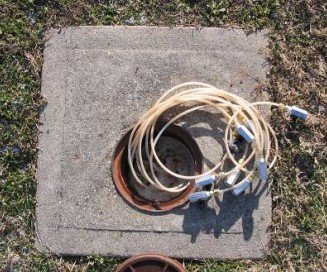 This method consists of the burial of a small diameter (typically ⅛ inch to 1 inch outer diameter) inert tube or pipe (stainless steel, Teflon, polyvinyl chloride, high density polyethylene, polyether ether ketone, Nylaflow, or similar) to a target depth with subsequent sampling of the soil gas after a period of time. Tubing may be buried in holes created with hand driven rods, direct-push systems, hand-augers, drills (for sub-foundation samples) or drill rigs for deeper samples. Clean sand is used as backfill around the tip, and the remainder of the borehole annulus is sealed, usually with a bentonite and water slurry. This method offers significant advantages when repeated sampling events are needed, or where the geology is not conducive to driven probes. Multiple tubes can be “nested” in the same borehole, if the seals between intervals are tight, and are often referred to as multilevel soil gas wells or nested probes.

Use tubing material that does not adsorb or off-gas volatile hydrocarbons. nylon, Teflon, and stainless steel all give comparable results for typical PHCs. For heavier molecular weight compounds, stainless steel shows the least adsorption, but may be impractical to use. Nylon is recommended over Teflon tubing, because nylon tubing is less expensive and the compression fittings are easier to seal. Polyethylene tubing, commonly used by direct-push firms for groundwater sampling, should not be used for soil vapor samples because the polyethylene tubing has been shown to adsorb hydrocarbons. 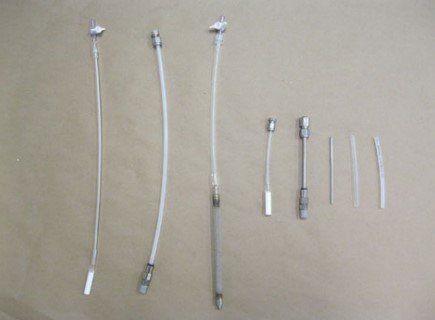 Nominally ⅛-inch or ¼-inch outer diameter tubing is recommended. Stainless steel, aluminum, ceramic, or plastic (choice depends upon project specifications) are used for probe tip material. Swagelok fittings or plastic valves (two-way plastic valves or stop cocks) are best for sealing tubing that will remain in the ground for an extended time. Options for surface termination include flush mounts on the floor/surface, belowground termination (with or without a locking cover), and various aboveground completions that are commercially available.

Collection of an equipment blank is recommended for all VI investigations, especially if metal probe tips are used. Zero-grade air or nitrogen should be drawn through the probe tubing, probe tip, and the sampling train at the start of the field program. The collected sample should be analyzed for the same compounds as the soil vapor samples. This practice confirms that the metal probe tips and other probe parts are clean before putting them in the ground.

For collection systems with large purge volumes or designed to collect large sample volumes, it is often necessary to seal the probe at the surface. Seals may also be necessary for small volume systems if the soils are extremely porous and the sampling depth is close to the surface (less than 3 feet). The most common sealing technique is to grout the surface contact of the probe.

Purging the Probe and Sampling Train

The sample collection equipment used for soil vapor surveys has an internal volume that is filled with air or some other inert gas prior to insertion into the ground. This internal volume must be completely purged and filled with soil vapor to ensure that a representative soil vapor sample is collected. Probe purging is typically accomplished using a pump or a syringe equipped with a three-way valve. Syringes are an inexpensive and simple approach for purging small volumes up to 1 liter. For larger purge volumes, a pump with variable flow rates and a flowmeter is more efficient. At a minimum, enough vapor should be withdrawn prior to sample collection to purge the probe and collection system of all ambient air or purge gas (1 purge volume). 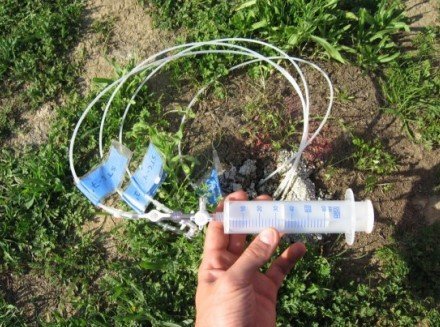 Figure 4: purging with a syringe

To minimize the potential desorption of contaminants from the soil, soil gas samples should be collected using techniques that minimize the vacuum applied to the soil. Higher vacuums also increase the potential for leaks in the sampling system. Most agencies require flows less than 200 mL/min. For relatively coarse-grained soils (high permeability), flow rate does not appear to be an important variable for soil gas concentration. The vacuum can be tested with pulling the syringe plunger or using a vacuum gauge placed between the probe and sample container.

Leaks in the sampling train or leaks of ambient air into the probe tubing can result in diluting the soil vapor samples with ambient air and will result in underestimating actual contaminant concentrations in subsurface soil gas. Excessive vacuum conditions resulting from low porosity soils or high moisture content soils may exacerbate the potential for ambient air leakage. Two methods of leak detection are recommended: (1) performing a “shut-in” test of the sampling train and applying a leak detection compound or water to the vapor probe at the surface or (2) applying a tracer gas over the probe and over the entire sampling apparatus.

Figure 5: Simple sampling train arrangement for a shut-in test using a syringe as the vacuum source. 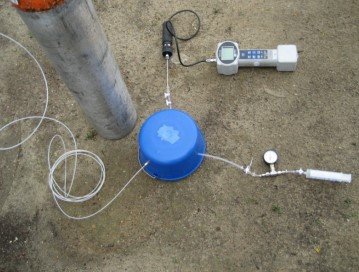 Method 2 involves enclosing the entire sampling apparatus, including sample container, all tubing and connections, and the vapor probe surface completion in a shroud, which is filled with a tracer (see Figure 8). 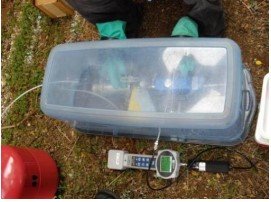 Figure 8: Covering the entire sampling system and probe with a shroud.

There are several sample collection methods that can be used for soil vapor.

After purging, the canister should be connected to the probe tubing, but not opened, before applying the leak detection compound. A vacuum gauge is used to measure the canister vacuum prior to sampling and the final vacuum after sampling. Prior to sampling, check the canister to ensure that sufficient vacuum is present. Laboratories typically place a vacuum of approximately 28 to 30 inches Hg on the canisters prior to shipment to the site. After confirming the result of leak test, the canister can then be safely opened. 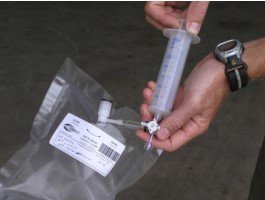 After purging and application of the leak detection compound over the probe, soil vapor can easily be transferred from the soil vapor probe into a gastight bag using a syringe (figure 9). pumps upstream of the gastight bag should not be used because cross contamination between samples will occur. The gastight bag should be filled, while being careful not to overinflate and potentially compromise the bag seals.

Gastight glass vials and glass containers with valves or stopcocks can also be used for sample collection. Prior to sampling, the gastight vial should be evacuated to a vacuum of approximately -26 to -30 inches Hg with an electric vacuum pump or with a hand vacuum pump. A soil vapor sample is withdrawn using a syringe as described previously, except that a needle is placed on one side of the three-way plastic luer valve.

Figure 10: Transferring soil vapor sample from a gastight bag into a 400 cc canister 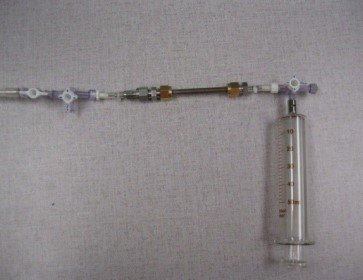 Other devices such as a low-flow pump can also be used to pass soil vapor over the adsorbent, but pumps upstream of the adsorbent should not be used as cross-contamination between samples will occur. Pumps should be calibrated before use to ensure correct measurement of volumetric flow. Also, the pump flow rate might change if the soil permeability changes. Sample flow rate should be to a flow rate of up to 50 mL/min for sampling in tight formations, and up to a maximum of 200 mL/min for sampling in permeable formations.

For fuel related compounds (TPH, BTEX) and biogenic gases (CH4, CO2, and O2), allowable containers include Tedlar bags, gas tight vials (glass or stainless steel), and passivated stainless steel canisters (Summa). For halogenated compounds (such as TCE, TCA, and PCE), allowable containers must be gas tight, but also dark to eliminate potential effects due to photo destruction. Adsorbents are suitable for most VOCs and SVOCs.