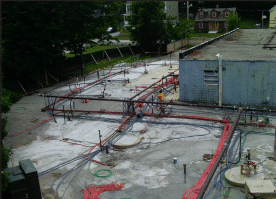 In 1979, Volatile Organic Compound (VOC) contamination was detected at concentrations above drinking water standards in two municipal water supply wells in Groveland, MA. The wells were shut down. The main source of the contamination was identified as the former Valley Manufacturing Products Company, which began manufacturing various metal parts in 1963. At the time, operators disposed of liquids through a leach field and it was later determined that a leaky underground storage tank containing TCE was also a source of groundwater contamination. Nearly 850 acres (344 hectacres) (including the former Valley Manufacturing Products Company property now known as the Groveland Wells Superfund Site) were added to the National Priorities List in 1982. Remedial actions at the Site included the installations and operation of a Soil Vapor Extraction (SVE) system in the source area between 1992 and 2002 and a groundwater extraction and treatment system, which has operated since 2000. Following a remedial investigation, it was determined that the SVE system was ineffective, thus ISTT was recommended.

The overall objective of the Remedial Action was to reduce concentrations of contaminants in the source area vadose zone soil and overburden groundwater to below the cleanup goals specified in the Record of Decision and Explanation of Significant Differences.

Due to high soil resistivity and permeability encountered in the vadose zone during electrode operation, the heating system was modified to include shallow steam injection wells.
×Scan to share with WeChat
04/06/2018
06/04/2017 Professional Information, Case Studies