Water Eutrophication and its Effect 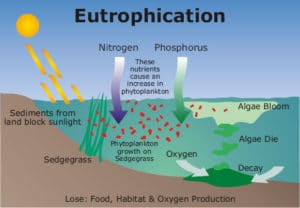 Nutrient pollution is one of America’s most widespread, costly and challenging environmental problems, and is caused by excess nitrogen and phosphorus in the air and water.

But when too much nitrogen and phosphorus enter the environment – usually from a wide range of human activities – the air and water can become polluted. Nutrient pollution has impacted many streams, rivers, lakes, bays and coastal waters for the past several decades, resulting in serious environmental and human health issues, and impacting the economy.

Too much nitrogen and phosphorus in the water causes algae to grow faster than ecosystems can handle. Significant increases in algae harm water quality, food resources and habitats, and decrease the oxygen that fish and other aquatic life need to survive. Large growths of algae are called algal blooms and they can severely reduce or eliminate oxygen in the water, leading to illnesses in fish and the death of large numbers of fish. Some algal blooms are harmful to humans because they produce elevated toxins and bacterial growth that can make people sick if they come into contact with polluted water, consume tainted fish or shellfish, or drink contaminated water.

Nutrient pollution in ground water – which millions of people in the United States use as their drinking water source – can be harmful, even at low levels. Infants are vulnerable to a nitrogen-based compound called nitrates in drinking water. Excess nitrogen in the atmosphere can produce pollutants such as ammonia and ozone, which can impair our ability to breathe, limit visibility and alter plant growth. When excess nitrogen comes back to earth from the atmosphere, it can harm the health of forests, soils and waterways.

Nutrient pollution and harmful algal blooms create toxins and compounds that are dangerous for your health. There are several ways that people (and pets) can be exposed to these compounds.

Drinking water can be a source of exposure to chemicals caused by nutrient pollution. Drinking, accidentally swallowing or swimming in water affected by a harmful algal bloom can cause serious health problems including:

Nitrate, a compound found in fertilizer, often contaminates drinking water in agricultural areas. Infants who drink water too high in nitrates can become seriously ill and even die. Symptoms include shortness of breath and blue-tinted skin, a condition known as blue baby syndrome.

A 2010 report on nutrients in ground and surface water by the U.S. Geological Survey found that nitrates were too high in 64 percent of shallow monitoring wells in agricultural and urban areas.

Byproducts of water treatment Stormwater runoff carries nutrients directly into rivers, lakes and reservoirs which serve as sources of drinking water for many people. When disinfectants used to treat drinking water react with toxic algae, harmful chemicals called dioxins can be created. These byproducts have been linked to reproductive and developmental health risks and even cancer.

Algal blooms can reduce the ability of fish and other aquatic life to find food and can cause entire populations to leave an area or even die. Harmful algal blooms cause thick, green muck that impacts clear water, recreation, businesses and property values.

Harmful algal blooms sometimes create toxins that can kill fish and other animals. After being consumed by small fish and shellfish, these toxins move up the food chain and hurt larger animals like sea lions, turtles, dolphins, birds, manatees, and fish.

Even if algal blooms are not toxic, they can hurt aquatic life by blocking out sunlight and clogging fish gills.

Nutrient pollution can create dead zones, areas in water with little or no oxygen where aquatic life cannot survive. Also known as hypoxia, these areas are caused by algal blooms consuming oxygen as they die and decompose. Aquatic animals must leave the affected area or die. Young fish and seafloor dwellers like crabs and clams are most likely to die in hypoxic areas.

Over 166 dead zones have been documented nationwide, affecting waterbodies like the Chesapeake Bay and the Gulf of Mexico. The Gulf of Mexico dead zone is the largest in the United States, measured to be 5,840 square miles in 2013. It occurs every summer because of nutrient pollution from the Mississippi River Basin, an area that drains 31 upstream states.

Acid rain, caused by nutrient pollution in the air, damages lakes, streams, estuaries, forests and grasslands across the country.

Airborne nitrogen compounds like nitrogen oxides contribute to the formation of other air pollutants such as ground-level ozone, a component of smog which can restrict visibility. Wind and weather can carry ozone many miles from urban to rural areas. Ozone pollution can damage trees and harm the appearance of vegetation and scenic areas.

Nutrient pollution has diverse and far-reaching effects on the U.S. economy, impacting tourism, property values, commercial fishing, recreational businesses and many other sectors that depend on clean water.

Nitrates and algal blooms in drinking water sources can drastically increase treatment costs. Nitrate-removal systems in Minnesota caused supply costs to rise from 5-10 cents per 1000 gallons to over $4 per 1000 gallons.

It can also cost billions of dollars to clean up polluted water bodies. Every dollar spent on protecting sources of drinking water saves in water treatment costs.

The tourism industry loses close to $1 billion each year, mostly through losses in fishing and boating activities, as a result of water bodies that have been affected by nutrient pollution and harmful algal blooms.

Fishing and shellfish industries are hurt by harmful algal blooms that kill fish and contaminate shell fish. Annual losses to these industries from nutrient pollution are estimated to be in the tens of millions of dollars.

Clean water can raise the value of a nearby home by up to 25 percent. Waterfront property values can decline because of the unpleasant sight and odor of algal blooms.