ABS: Well 12A was a municipal water supply well located in Tacoma Washington approximately 4 miles southwest of the southernmost tip of Commencement Bay. The well is now a superfund site contaminated with chlorinated alkenes. Groundwater samples were collected and analyzed by portable GC device and compared the result with GC-MS in off-site lab.

Well 12A was a municipal water supply well located in Tacoma Washington approximately 4 miles southwest of the southernmost tip of Commencement Bay. The well is now a superfund site contaminated with chlorinated alkenes. Around 1923, a paint and lacquer thinner manufacturer and an oil recovery facility began operations at this location. The solvents used by this manufacturer were stored in drums and may have leaked. In addition, filter cake from oil recovery efforts were landfilled at this site. In 1981, solvents, particularly chlorinated alkenes, were detected in the water at this site and the well was removed from service. Well 12A was officially added to the national priorities list or NPL in 1983 labeling it a superfund site. [1] There has been a consistent and concerted effort to clean up the site since that time.

Weighing less than 5 pounds, the FROG-4000™ is the smallest portable GC system on the market today. The FROG™ uses a MEMS preconcentrator which is coated with a novel designer nanomaterial and micro fabricated GC column-technology that cannot be found in even the most advanced bench top GC systems. These leading edge micro-fabricated components enable the FROG™ to achieve the same detection limits that a traditional bench top GC system achieves but at a fraction of the cost and size. A traditional GC analysis would require the GC itself, a purge-and-trap system, a compressed gas cylinder, a computer, and a generator to operate it in the field. All of that equipment may weigh hundreds of pounds and require up to an hour for every analysis. The FROG-4000™, however, has the purge and trap built in, is battery operated, and uses ambient air as the carrier gas yet weighs only 4.8 pounds. In about 5 minutes, the FROG-4000™ can analyze water for VOCs and report the results to its display. The FROG’s rechargeable battery will give up to 8 hours of usage in the field. The battery can be swapped in the field for extended use. A small pump on the inside of the FROG™ scrubs ambient air for the carrier gas. The scrubber material is inexpensive and easy to exchange for fresh material. There is no compressed gas cylinder, which minimizes the cost of ownership of the FROG™.

A 6 point calibration was prepared in water for vinyl chloride, trans-1, 2-dichloro-ethene, cis-1, 2-dichloroethene, trichloroethene, and tetrachloroethene. The calibration curve included concentrations of 4, 8, 20, 80, 200, and 400µg/L. Each standard was stored in a VOA vial with zero head space and refrigerated during shipping. (A professionally prepared calibration kit is available on Defiant’s website -www.defiant-tech.com.) The standards were shipped with the FROG™ to Tacoma. The evening prior to the field test, we calibrated the FROG-4000™ using our pre-made standards. Calibrating with 6 calibration standards took approximately 35 minutes and each response curve resulted in an R2 correlation greater than 0.995. While a computer is required for calibrating the FROG™, it is not required for use in the field. The calibration can be downloaded to the FROG-4000™and when this is done, it will report analyte name and concentration to its display. FROG™ also has an integrated micro-SD card which will store every chromatogram from every analysis. This feature allows the user the ability to examine and archive each chromatogram at their leisure after the sampling event. 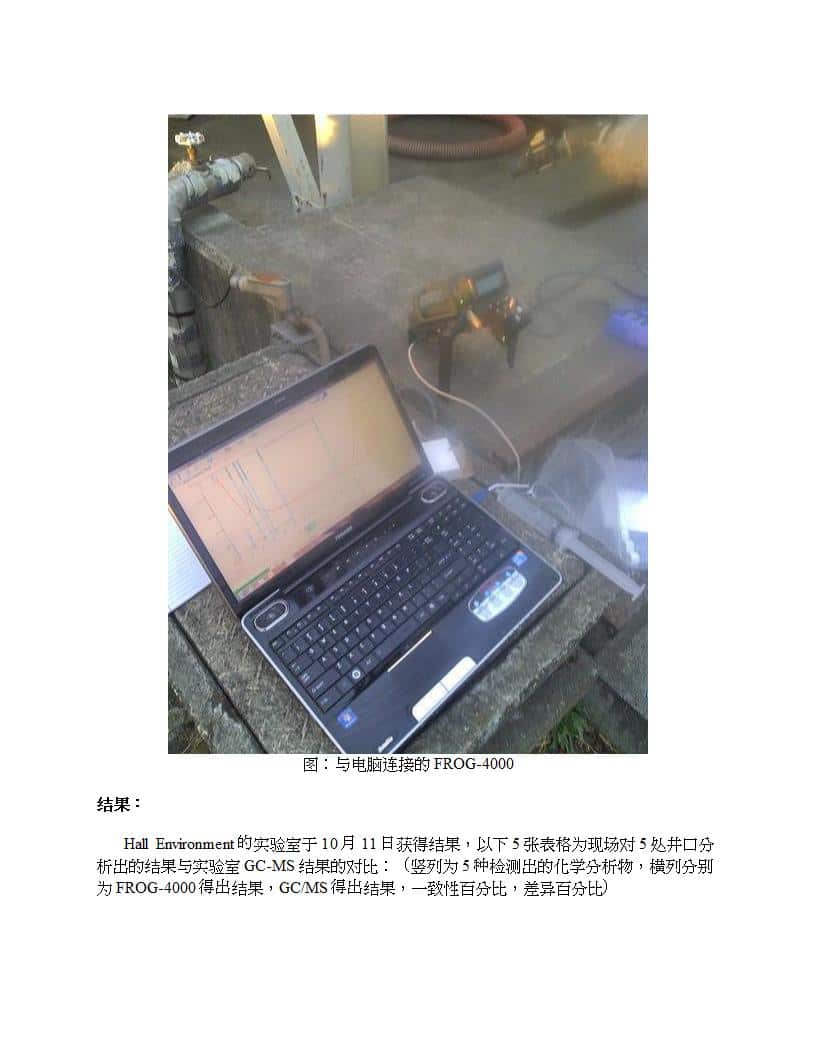 Figure 2: The FROG 4000™ is at well EW-1 analyzing water live in the field. The large syringe pictured next to the laptop is used to rinse the sparge bottle and sparge needle between samples.

Figure 2 shows the FROG™ in the upper right hand corner. We collected 3 VOA vials at each well to be analyzed at Hall Environmental, a commercial analytical laboratory located in Albuquerque, NM. As required by EPA SW-846/8000, each sample was stored with zero head space and preserved with hydrochloric acid. Finally, all samples were transported to the testing laboratory on ice to maintain a temperature of 4⁰C.

Sampling all five wells took about 2 hours. In that time, we were able to move between each well location, collect samples, analyze each well sample with the FROG™, rinse the sparger with clean water, and run two clean blank samples between each well sample. We used distilled water purchased at a grocery store as our source of clean water, a practice common in field testing. A 60mL syringe filled with distilled water was used to clean the sparging needle and the sparge tube. Thanks to FROG’s™ analysis speed, we had the luxury of analyzing two clean blank samples between each well water sample.

At the end of the sampling event, the FROG™ had completed all of its analyses live in the field. The split samples were refrigerated and packed in a cooler for the return flight. When we returned to Albuquerque, the samples were delivered to Hall Environmental for analysis by purge and trap GC/MS by EPA method 8260B. The temperature, headspace, and preservation were checked by Hall personnel upon taking custody of the samples and all of those storage requirements were in compliance with EPA SW-846/8000.

We received our results from Hall on October 11th, well within the 14 day holding time for 8260B. The tables below show the comparison between the analysis done by the FROG™ using our Ellvin™ software and GC/MS. 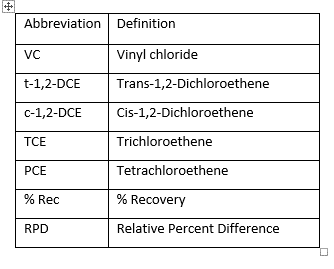 The following 5 tables show the results from the analyses performed on the FROG™ in the field and the lab results for split samples analyzed by GC/MS at Hall Environmental. The table also compares the data in two ways. First, compare the data by assuming that the lab results are the standard, therefore we present and the GC/MS results. Second, we compare the data as two duplicates. The final column in each table lists the relative percent difference (RPD). The equations for %Rec and RPD are shown below. 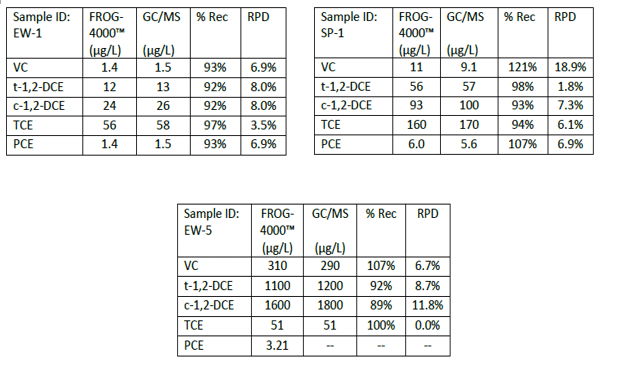 The results in table 4 for t-1, 2-DCE and c-1, 2-DCE were reported from our 10X dilution in the field. We diluted 0.5mL of sample to 5mL total volume prior to analyzing well EW-5. This is a process quite easy to accomplish in the field with 2 luer lock syringes. Next, we ran the sample with no dilution in order to report the low level detections like TCE and PCE. Hall used a 10X dilution on the split sample and therefore missed the PCE; it was diluted below their detection limit for PCE. Overall there was excellent agreement between the FROG™ and the GC/MS.

There are definite advantages in using the FROG™ over sending samples offsite. Holding time is one such issue. For an earlier field test, a different analytical lab in Tacoma was used for the testing; unfortunately their workload was such that they were unable to analyze the samples within the proper holding time. The FROG™ however had its results completed in the field.

Another advantage is that the FROG™ gives environmental consultants the ability to economically analyze a large number of samples. This enables a more thorough characterization of the site and environmental professionals get their results real time in the field so decisions can be made on the spot preventing further pollution.