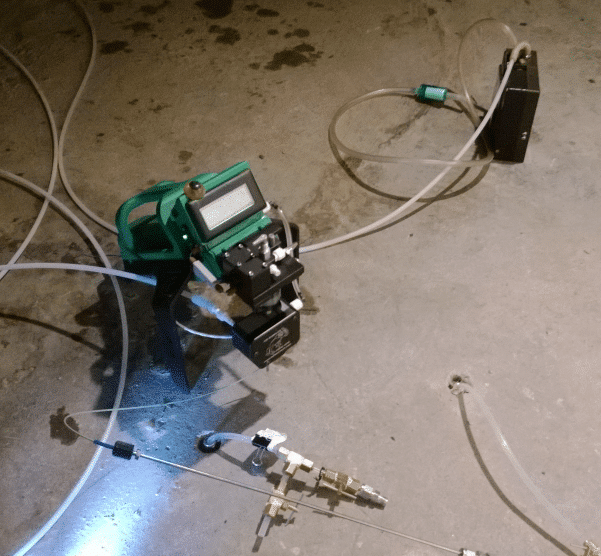 Abs:  Defiant Technologies participated in a field test in cooperation with EPA NERL in Nevada, RTI International, and ARCADIS-US. The test was conducted at a home located in Indianapolis shown in Figure 1. Two systems were deployed in Indianapolis. One was used to continuously monitor the ambient air concentration of tetrachloroethene (PCE) in the basement and the second system was used to monitor PCE vapors in sub-slab ports and obtain measurements of PCE in water from a monitor well. Several split samples were collected and sent to an offsite lab for analysis by thermal desorption GC-MS. Split sample data shows good correlation with onsite measurements. Results are presented in this summary.

Test Summary: Defiant Technologies participated in a field test in cooperation with EPA NERL in Nevada, RTI International, and ARCADIS-US. The test was conducted at a home located in Indianapolis shown in Figure 1. Two systems were deployed in Indianapolis. One was used to continuously monitor the ambient air concentration of tetrachloroethene (PCE) in the basement and the second system was used to monitor PCE vapors in sub-slab ports and obtain measurements of PCE in water from a monitor well. Several split samples were collected and sent to an offsite lab for analysis by thermal desorption GC-MS. Split sample data shows good correlation with onsite measurements. Results are presented in this summary.

Testing: Two FROG-4000 units were calibrated for trichloroethene and tetrachloroethene. PCE was the contaminant of concern and the calibration data for that compound is shown in figure 3. At the request of the sponsoring agency, we improved the sensitivity of the system by removing the injection split and by making a small modification to the material deposited on the preconcentrator. As a result, we were able to estimate a detection limit of 0.03ppbv for PCE. Both FROGs were calibrated by preparing standards in air sample bags using a pressurized gas cylinder whose concentration was certified by the manufacturer. The calibration data for PCE, its calibration curve, and correlation are shown in figure 3. We used a linear fit on for PCE and as seen in figure 3 the fit was excellent. 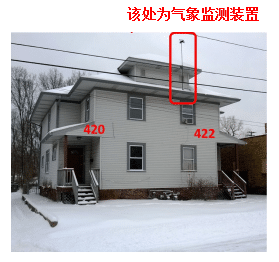 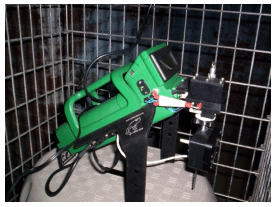 One of the two systems was used as an unattended continuous monitor. It was placed in a locked cage for the duration of the test (figure2). We used the other system to monitor PCE concentrations in various sub-slab ports, wall ports, and concentrations of PCE in water drawn from monitor wells. Three 8 hour shifts were established to monitor sub slab and wall port PCE concentrations for the first week. Thermal desorption tubes were taken during each shift and sent to an off-site lab. On the first day of the study, we compared PCE measurements in the basement with ambient air concentrations taken at the curb. The curbside concentrations were assumed to be clean air. Figure 4 shows a comparison of the chromatographic location of PCE on the FROG for three different analyses of air. One can see a vast difference between the system response at the curb (the blue trace) versus positive detections of PCE made in the basement (red and green traces). The trace from the curb clearly shows a blank chromatogram while the other two show strong peaks for PCE. It is worth noting the large signal size of the chromatographic peaks shown for PCE in figure 3 both of which are less than 1ppbv. The unattended continuous monitor was left on location for the entirety of the field exercise. Data from that system was used to draw comparisons between PCE concentration and meteorological data as well as an attempt to draw a correlation between radon intrusion and PCE intrusion. The second system was used to compare onsite PCE measurements with offsite lab data. Split air samples and split water samples were sent to an offsite lab for comparison. Results from the FROG-4000 were obtained instantaneously. Defiant received the offsite data approximately one month after the study. 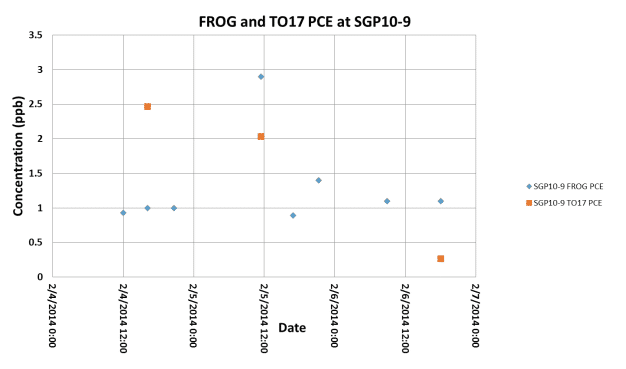 Results: At the beginning of the study, air sample bags with known concentrations were prepared by Air Toxics and shipped to Indianapolis. The “as prepared” concentration in the bag was 162ppbv of PCE. The FROG-4000 reported the concentration to be 158ppbv. GCMS analysis of the bag was reported at 78ppbv. The difference in the measurements could be as simple as calibration point preparation. Calibration standards for the FROG were prepared in the same way as the bag was prepared. It is more typical for a GCMS operator to spike a liquid standard into a thermal desorption tube to generate a calibration standard. These two means of preparation can result in different results and in this case appears to have made a difference. Next, we present two of the split samples: one low concentration and one high concentration. Figure 5 shows a comparison of the measurements taken by the FROG-4000 onsite compared with data determined by thermal desorption GC-MS made by an offsite laboratory. The first thing we note is that the data acquired by the FROG was acquired onsite in a 7 minute analysis cycle as compared to one month for the data to be delivered to Defiant from an offsite lab. In addition, operation of the FROG was largely “hands off”. The user connected the sampling wand to a sub slab or wall port and pressed the start button. The chemical name and concentration appeared on the display in about 7 minutes. The thermal desorption (TD) tubes were connected to one of the ports and then a 60mL syringe with a special valve were used to draw several volumes of the syringe through the TD tube. While not labor intensive, the measurement on the FROG was typically completed prior to completing sample collection and storage for the TD tube. Figure 5 shows a comparison of low level concentrations determined by GCMS and the FROG-4000. The correlation is good, the average reading for the FROG is 1.3ppbv and the offsite lab average reading is about 1.6ppbv. Figure 6 shows a comparison of larger concentrations. This data set also shows good correlation. The offsite laboratory reports an average concentration of 25ppbv and the FROG reports an average of 19ppbv.

The same FROG that was used to sample sub slab ports was also used to analyze monitor well water samples. The results in the table above show a comparison between results for ground water analysis collected in the field using the FROG-4000 and offsite analysis of split samples for those monitor wells. Results here show the same order of results among the three wells for the FROG as for the fixed based lab. The FROG results are about two times higher. However, the concentrations observed are so low that the difference could be attributed to how little is known about sample stability at these very low concentrations. In addition, it seems at least possible that at these low concentrations there could have been some losses in shipping to an offsite lab.

Results continued: The data collected on the FROG that was used as an unattended continuous monitor for PCE was plotted against a variety of environmental and chemical data. The FROG produced a data point every 7 minutes. The 7 minute cycle time included sample collection, chromatographic analysis, and cool down. The FROG presented a unique opportunity to correlate short time frame data like wind speed or pressure readings with high sensitivity rapid measurements of PCE. The first correlation made was between measurements of radon gas intrusion made by a commercial radon detector versus the concentration of PCE measured by the FROG- 4000. Figure 7 is an overlay of the concentration of PCE (blue data points) with radon measurements (red data points). While there is some correlation especially the two large features in the data directly following the marker for 2/20/14, there is only a loose correlation for the rest of the data. Figure 8 however shows a strong correlation between changes in wind speed and changes in the concentration observed for PCE. Conclusions: Due to its size, weight, sensitivity, and speed of analysis, the FROG is a truly unique GC system. While past studies have used bench top GC system as continuous monitors for vapor intrusion, none of those systems matched the portability, compactness, and sensitivity of the FROG-4000. At under 5 lbs, it was simple to use the FROG in a variety of settings. Thanks to the FROG’s versatility, we were able to quickly change from making vapor phase measurements to making measurements for VOCs in water. In addition to the opportunity to collect split sample data and test the capability of the FROG as a vapor intrusion monitor, Defiant was also able to test our software and hardware for use in long term monitoring. Thanks to this test bed, we were able to improve the software’s long term data collection stability and the test bed inspired a new feature for the hardware. During the test, the FROG was connected to a computer to log chromatographic data. Defiant has since added a feature to the FROG so that it now continuously cycles and logs chromatographic data on a micro-SD card by starting the FROG in continuous cycle mode. Now when the user holds down the FROG’s start button while powering up the FROG, it will enter the new mode. Once the user initiates the first analysis, the FROG will operate continuously until power is interrupted. After a data collection event, the user may import their data into our software for analysis. 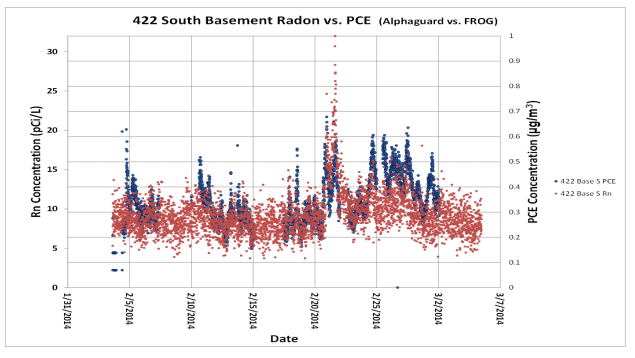 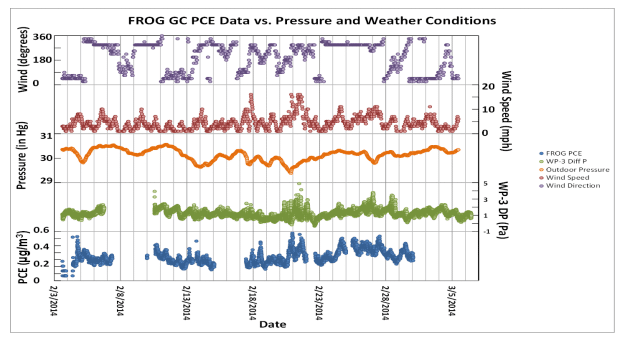