Type of DNAPL and DNAPL Properties

Common DNAPL compounds include materials that have been or are still widely used in industrial and commercial processes, such as the following:

DNAPLs are denser than water, with limited and varying solubility in water, and thus tend to occur in a separate non-aqueous phase in the subsurface. Common DNAPL compounds include materials that have been or are still widely used in industrial and commercial processes, such as chlorinated solvents and coal tar. Different types of DNAPLs have varying physical and chemical properties that govern their subsurface behavior. For example, chlorinated solvent DNAPLs have high solubility relative to other DNAPLs. Nevertheless, a number of primary fluid and formation roperties affect all DNAPL interactions with porous media (or with other fluids) as well as their subsurface behavior. Some of these properties are inherent to the DNAPL fluid, while others involve the combined properties of the fluid and its interaction in a particular subsurface media.

The key properties at DNAPL contaminated sites include: aqueous solubility, density, viscosity, volatility, interfacial tension, residual saturation, saturation, relative permeability, and capillary pressure. Because the physical properties of DNAPLs affect their mobility characteristics (Figure 1) in the subsurface, it is important to consider these properties at sites where DNAPL is found or existed at the site following the initial contaminant release or spill (although, as discussed below, many late-stage sites do not contain any residual DNAPL). The physical properties of pure chemical compounds that include DNAPLs are readily available in many references (DNAPL Integrated Site Characterization, ITRC 2015); however, the actual DNAPL at a site may be a mixture of chemicals with significantly different physical and chemical properties than that of fresh DNAPL or the pure-phase components.

In developing a thorough site characterization program, it is critical to determine the presence and distribution of DNAPL, vapor, dissolved, and sorbed chemical phases of contamination across the various geologic media and understand that the distribution of these contaminants will change over the lifecycle of the site (Figure 2).

The presence of DNAPL constituents represents a potentially persistent reservoir of contaminant mass that can continue to release dissolved contaminants over long periods; thus, understanding the potential presence and distribution of DNAPL in the subsurface is critical to long-term environmental site management. DNAPL migration is governed by scientific principles of multiphase flow in porous media. Downward migration of DNAPLs is largely driven by gravity. Additionally, subsurface lithologic heterogeneity leads to differences in subsurface pore structure and capillary properties. As a result, downward migration of DNAPL results in flow instability where isolated fingers of preferential DNAPL migrating along preferred pathways develop, leaving a highly variable distribution. These variations are commonly present in the subsurface matrix, even in formations that initially appear to be homogeneous. The existence of these highly variable fingers of DNAPL in the subsurface makes the detection of DNAPL challenging, driving the need for improved site characterization methods. 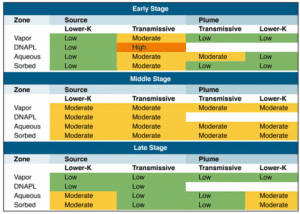 The perspective on what represents a source zone at a DNAPL site has evolved over the past few decades, and this broader understanding of the extent of source material has led to the realization that, at many sites, DNAPL may not be the primary factor in contaminant mass that sustains a plume over time. Moreover, differences in solubility significantly affect the lifecycles of DNAPLs in the subsurface. Most chlorinated solvent DNAPL sites can be described in terms of three stages of development.

In the initial (early) stage, DNAPL predominates and contaminants migrate downward through pore spaces of more transmissive zones of the geologic formation, leaving ganglia of residual (immobile) DNAPL held within the pores by capillary forces. In the middle (mature source) stage of the source zone DNAPL lifecycle, a significant portion of the contaminant mass has migrated into vapor, aqueous, and sorbed phases in both transmissive and low-permeability zones of the formation. In the late (weathered, aged/treated sources) stage of chlorinated solvent sites, DNAPL is often no longer detected and chlorinated solvent concentrations may persist in the aqueous phase of the transmissive zone due to desorption and back-diffusion from the contaminant mass in the low-permeability matrix into the higher-permeability matrix. A late-stage site that no longer contains DNAPL is still considered to be a “DNAPL site” because DNAPL was an important part of the historical CSM. 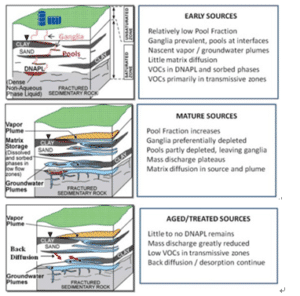