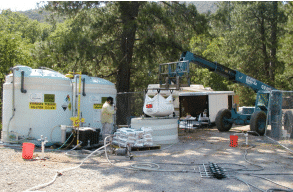 ABS: Elevated levels of BTEX, MTBE, and TAME were present near the site. The ISCO treatment consisted of injections of Klozur® that were performed simultaneously into 12 injection wells. The chemical oxidation process can be described as a controlled, moderate-high temperature, and low-pressure application.

The Site is a former UST fueling facility located on the North shore of Lake Shasta. Near the source area, elevated levels of BTEX, MTBE, and TAME were present. The treatment area consists of an area which measured approximately 45 feet by 85 feet (3,825 square feet) near the former underground storage tanks (USTs). The soils at the Site consisted primarily of silts and sands to a depth of 62 feet. The depth to groundwater at the Site was approximately 20 feet below ground surface (bgs).

The ISCO treatment area was prepared by installation of 12 injection wells, with two of the wells being deep nested wells (screened from 50 to 70 feet) constructed alongside shallow wells (screened from 20 to 40 feet). Each well was estimated to have a radius of influence of approximately 13 feet each. Approximately 12,000 pounds of sodium persulfate were injected first, followed by injection of 11,700 gallons of 10% hydrogen peroxide to act as the catalyst. For safety reasons, no excess pressure was applied during the injections. The injections were performed simultaneously into all 12 injection wells using a manifold system. The chemical oxidation process can be described as a controlled, moderate-high temperature, and low pressure application. In-situ temperatures between 120 and 150 degrees Fahrenheit were continuously monitored and maintained using thermocouples and data-loggers during the injections, which ensured the optimal generation of hydroxyl radicals and desorption of contaminants from the soil. 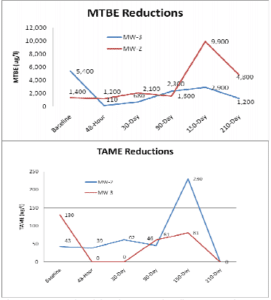 This site is regulated by the Central Valley Regional Water Quality Control Board. Based on the declining trend of all contaminants, it is expected that this site may be eligible for No Further Action after six more months of groundwater monitoring.