Abs: All passive samplers are deployed down a well to the desired depth within the screened interval or open borehole to obtain a discrete sample without using pumping or a purging technique (ITRC 2006)

There are three generic forms of passive (no purge) samplers:


All are deployed down a well to the desired depth within the screened interval or open borehole to obtain a discrete sample without using pumping or a purging technique (ITRC 2006). Most can be stacked to obtain samples at multiple depths. Some samplers can also be used to measure contaminants in groundwater as it enters a surface water body. Several samplers were originally designed for surface water sampling, but may be modified for deployment in monitoring wells of appropriate diameter. 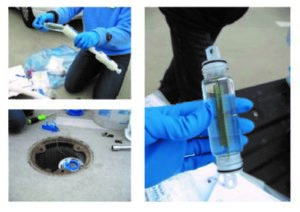 Thief samplers are designed to obtain an instantaneous grab (point) groundwater sample at the depth to which they are lowered. They are activated either by pulling up or using an up and down motion to force water into the sampler (HydraSleeve™) or by a triggering device at the well head (Snap™, Discrete Interval, Kemmerer). They are effective for collecting any type of chemical species; however, collecting a sufficient quantity of water to enable testing for all chemicals of concern may be an issue.

Diffusion, or equilibrium, samplers are devices that rely on diffusion of the analytes to reach equilibrium between the sampler fluid and the well water (Vrana et al. 2005). Samples are time-weighted toward conditions at the sampling point during the latter portion of the deployment period. The degree of weighting depends on analyte and device-specific diffusion rates. Typically, conditions during only the last few days of sampler deployment are represented (ITRC 2006). Depending upon the contaminant of concern, equilibration times range from a few days to several weeks (ITRC 2006). Diffusion samplers are less versatile than grab samplers insofar as they are not generally effective for all chemical classes. Like grab samplers, they can be stacked to obtain multiple depths within a well screen or open hole boring.

Integrating, or kinetic, samplers are designed to sequester chemicals over the period of time they are deployed (Vrana et al. 2005). Analytes are trapped or retained in a suitable medium which can be a solvent, chemical reagent or a porous adsorbent. Hence they produce a total value of the chemicals that have come in contact with their sampling medium. This total can later be converted to a time weighted average concentration. Because of the sequestration mechanism, they are capable of achieving very low detection limits.

Both the diffusion and integrating samplers depend upon permeation or diffusion through barriers that hold their receiving phase. This diffusion process is chemical and barrier specific. For the diffusion samplers this sampling rate affects the time they need to be deployed in order to have the sampler fluid come into equilibrium with the contaminant concentrations in the ambient water. For the integrating samplers, the sampling rates are used to convert the total concentration found in the receiving phase to an average concentration in the water. Sampling rates for a number of analytes and barriers can be found in the literature, otherwise they must be determined experimentally in a laboratory. Note that integrating samplers, like diffusion samplers, may require a minimum number of deployment days before accurate averages can be calculated (Vermeirssenn et al. 2009). 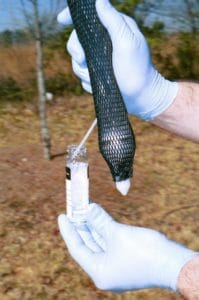 The effectiveness of the use of all types of passive samplers in a well is dependent on the assumption that there is horizontal flow through the well screen and that the quality of the water is representative of the groundwater in the aquifer directly adjacent to the screen (Vroblesky 2001).

These conditions are not always met- especially in wells with long screens (10 feet or more) that are monitoring a heterogeneous aquifer. Vroblesky (2001) suggests that the decision to use passive samplers be made on a site specific, well specific basis. He further advocates the importance of determining the vertical distribution of contaminants in wells having 10-ft-long well screens, and of determining both the vertical distribution of contaminants and the potential for intra-borehole flow in wells having screens longer than 10 ft. It is only by determining these two parameters that a proper interpretation of the analytical data can be made.

The potential for biofouling is site specific. The assumption is generally made that biofouling will be minimal. However, before full scale deployment, it may be prudent to verify this assumption. Biofouling of diffusion samplers may prevent their reaching an equilibrium condition, if not causing loss of integrity (e.g., regenerated-cellulose dialysis membrane samplers are directly attacked by bacteria). Unless measures such as employing performance reference compounds(PRCs) are taken, biofouling of integrative samplers will potentially change the uptake rate that is needed to convert the analytical results into time weighted averages—negating the value of the sampling data (Vrana et al. 2005).

Vroblesky (2001) suggests that the use of diffusion samplers only be attempted at well characterized sites.