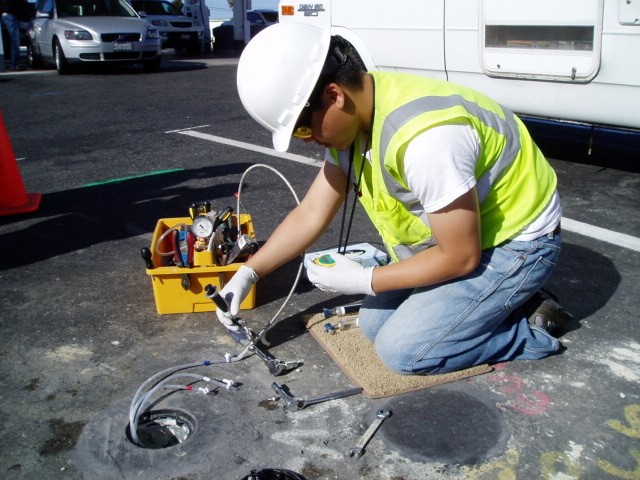 ABS：This chapter describes a method for PVI screening based on the vertical distance from a petroleum vapor source to a building foundation (vertical separation distance). Application of the method is expected to improve PVI screening and reduce unnecessary data collection at numerous petroleum release sites.

This chapter describes a method for PVI screening based on the vertical distance from a petroleum vapor source to a building foundation (vertical separation distance). Application of the method is expected to improve PVI screening and reduce unnecessary data collection at numerous petroleum release sites.

The vertical screening distance is the minimum thickness of soil between a petroleum vapor source and building foundation necessary to effectively biodegrade hydrocarbons below a level of concern for PVI (see Figure 1). 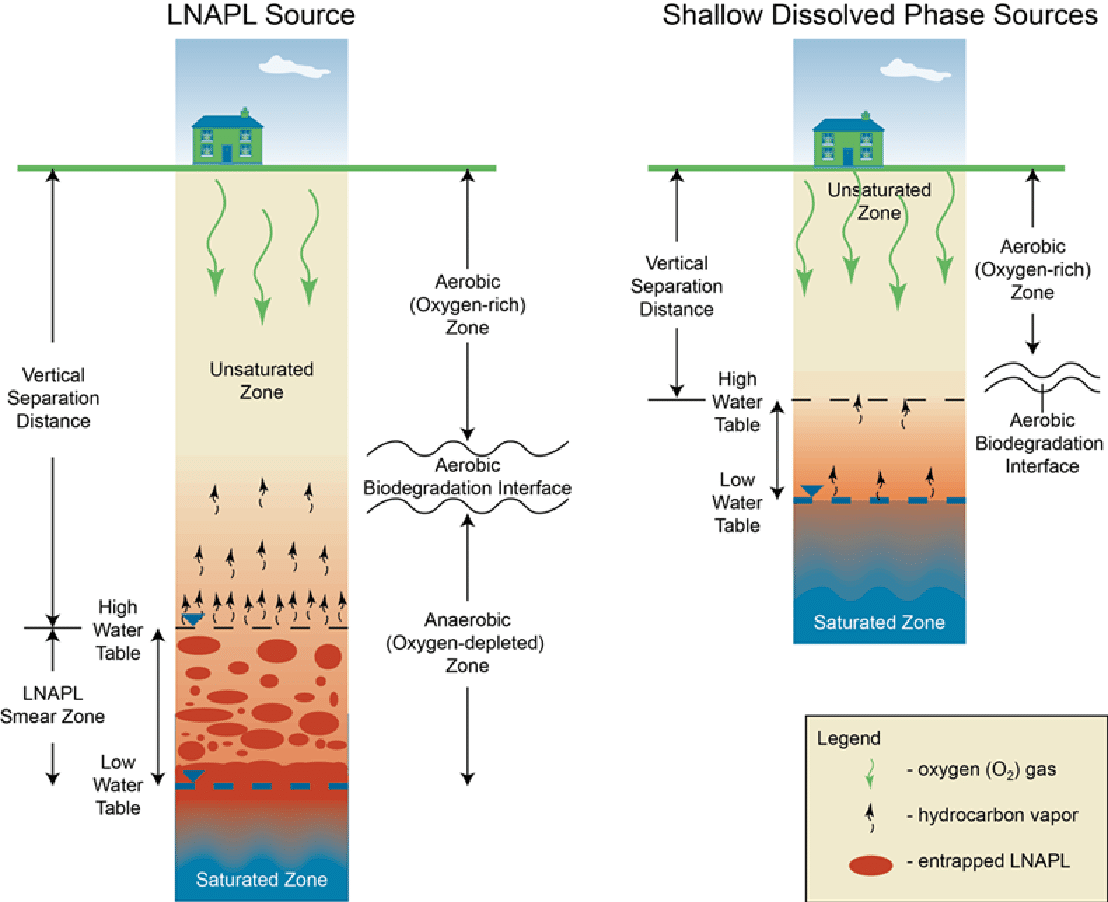 Figure 1. Conceptual model of petroleum vapor transport for an LNAPL source and a dissolved phase source.

The preliminary CSM is based on critical data obtained from an initial site investigation or valid preexisting data. If COC concentrations in soil and groundwater are below existing PVI regulatory criteria, the development of a preliminary CSM and use of a vertical screening distance are not required and no further PVI evaluation is needed.

Assess whether further site investigation is necessary based on the measured vertical separation distance between the building foundation and the top of the petroleum vapor source in soil or groundwater. 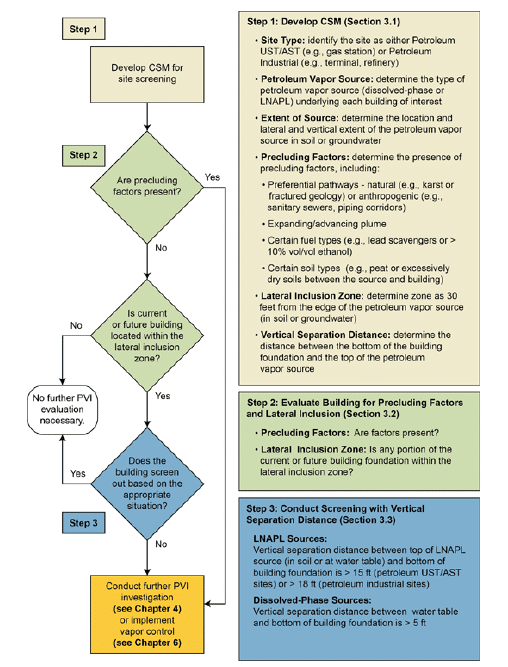 The preliminary CSM is developed by collecting soil and groundwater data as part of routine initial site investigations. The CSM necessary for PVI screening has the following components:

Differences in the vertical screening distances according to site type may relate to the volume of the LNAPL release or extent of the LNAPL plume.

The empirical studies found that vertical screening distances are longer for LNAPL sources than for dissolved-phase sources because LNAPL sources can generate higher concentrations of vapors.

The LNAPL may not be readily apparent unless there is measurable thickness of LNAPL in a nearby groundwater monitoring well. In these cases, a multiple-lines-of-evidence approach can be used for LNAPL identification (see Table 3-1). 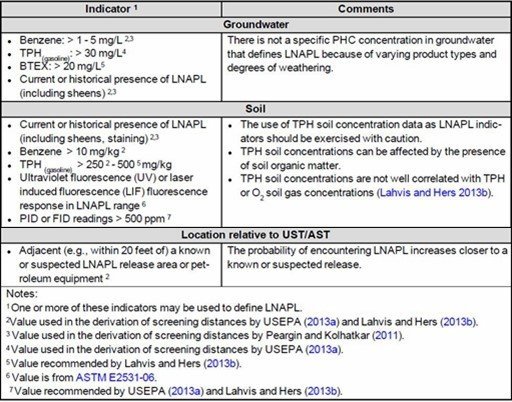 Proper delineation of the petroleum vapor source in soil or groundwater is critical in determining which buildings are within the lateral inclusion zone (see Section 3.1.5) and the vertical separation distance (Section 3.1.6). There is a higher probability of encountering LNAPL in the vadose zone near and below former or current UST/AST equipment, in known or suspected release areas, along perching units or low-permeability soil layers, or in a smear zone near the water table. Soil sampling and soil screening using a photoionization detector (PID) or flame ionization detector (FID) are recommended for delineating vadose zone sources.

Typical precluding factors include the following:
1. Preferential pathways that intercept both the source (either LNAPL or dissolved phase) and building foundations (see Figure 3-3).
2. Ongoing releases of petroleum products that result in expanding or mobile contaminant plumes.
3. Certain fuel types has insufficient data to draw confident conclusions for these fuel types. These fuel types include:
4. Soils with a naturally high content of organic matter or excessively dry soil conditions between the source and building foundation also preclude application of the screening method discussed in this document. These soils are precluding factors for the following reasons: 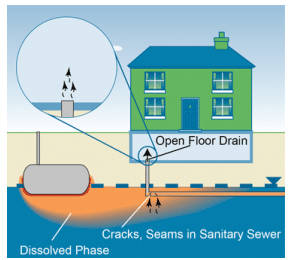 The lateral inclusion zone is used to determine whether a building is close enough to the lateral edge of a petroleum vapor source to be considered for PVI screening. This method is based on interpolation of contaminant concentrations between monitoring locations.
Lateral inclusion distances and vertical screening distances should be approximately the same. The vertical screening distances are expected to apply laterally in the absence of preferential pathways or significant hydrogeologic barriers.
A conservative, 30-foot lateral inclusion distance may be considered appropriate to incorporate the uncertainty.

Vertical separation distance should be determined from the top of the source closest to the building foundation where these additional (secondary) sources are identified.
The soil within the vertical separation distance may contain detectable concentrations of PHCs, which typically do not interfere with biodegradation (because the soil does not contain LNAPL source material).

If no precluding factors are present, then determine whether the edge of the building foundation is within the lateral inclusion zone that extends 30 feet from the edge of the petroleum vapor source.

Several empirical studies have defined vertical screening distances for LNAPL and dissolved phase sources. Although the values derived for dissolved-phase and LNAPL sources vary slightly among the studies, they can be conservatively defined as:

Determine whether the vertical separation distance between the top of the petroleum vapor source and the bottom of the building foundation exceeds these vertical screening distances for either an LNAPL source (see Figure 5) or a dissolved-phase source (see Figure 6). If so, then no further evaluation of the PVI pathway is necessary. If not, then further site investigation or vapor control and site management is necessary.

Guidelines for Office Prevention of COVID-19 Translated from the Chinese Center for Disease Control and Prevention 03/21/2020
error: Content is protected !!