The Danville facility was originally constructed in the 1880’s to manufacture rolled steel and steel
parts. A total of 26 on-site tanks and pits were reportedly used for storage of raw materials and
wastes, including gasoline, Varsol®, kerosene, fuel oil, cutting oil, hydraulic oil and waste oil.
Numerous remediation activities have been completed on the site since 1972. A brief summary of these activities is provided below. 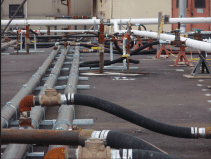 Approximately 127,361 million British thermal units (MM BTUs) were injected into the subsurface and 23,379 MM BTUs were extracted, resulting in a net energy gain of 103,982 MM BTUs. As a result, the IRM treatment volume was successfully heated and maintained within a target temperature range (+/- 90 degrees Celsius) during the IRM O&M period.

Approximately 26,000,000 gallons (100,000,000 liters) of groundwater was extracted from perched groundwater table within the fill unit and regional unconsolidated aquifer within the sand/gravel unit, which equates to an average total extraction rate of 34 gallons per minute (130 liters per minute) during IRM O&M.

Approximately 19,500 lbs (8,850 kgs) of CVOCs were removed from the subsurface as a result of IRM implementation. Mass removal rates up to 160 pounds per day (73 kgs per day) were observed during the initial four months of O&M. The mass removal rate was observed to stabilize after May 2008 and decrease significantly by IRM system shutdown.

Approximately 12,700 gallons (45,000 liters) of LNAPL were extracted from the subsurface, recovered by separation, and then disposed offsite by incineration. A decreasing trend in LNAPL recovery was also observed though completion of IRM O&M.