Differences Between PVI and CVI

While PVI has similarities to chlorinated vapor intrusion (CVI), recent research and analysis has increased the understanding of the significant differences between PVI and CVI. The defining feature of PVI that distinguishes it from VI of other volatile chemicals, is the relatively rapid rate of attenuation of petroleum hydrocarbons (PHCs) because of aerobic biodegradation in vadose zone soils. Table 1 summarizes key differences between PVI and CVI.

The fate and transport mechanisms, such as partitioning, diffusion, biodegradation, advection, and mixing explain the behavior of PHC vapors and describe how this behavior affects the PVI pathway.

A CSM is a visualization of site conditions that allows for evaluation of contaminant sources and affected media, migration pathways, and potential receptors. This tool provides an iterative representation of the site and guides decision making while assessing the PVI pathway.
A CSM for PVI incorporates biodegradation and is used to determine whether a complete PVI pathway exists or, if needed, the information required to make this determination. Information to construct the CSM is acquired from historical research, site characterization, and an understanding of contaminant behavior, among other sources. The CSM is a dynamic tool that should be refined throughout the life of the project as new information is acquired. 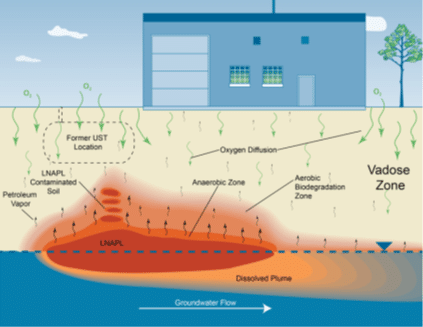 Petroleum fuels can be broadly categorized as “gasolines,” “middle distillates,” and “residual fuels,” with the middle category including diesel, kerosene, Stoddard solvent and some types of jet fuels (API 1994). The detailed chemistry of petroleum fuels has been extensively studied (Potter and Simmons 1998, USEPA 2009f). These fuels are primarily composed if hundreds of nonspecific, aliphatic hydrocarbon compounds with a small, variable amount of aromatic compounds, including BTEX and naphthalene. The vapors associated with petroleum fuels are similarly dominated by aliphatic compounds with smaller amounts of aromatic compounds (USEPA 2013a, Brewer et al. 2013).

Petroleum products may be released to the environment at industrial, commercial, and residential properties. The type of site and PHC, as well as the nature of the release and subsurface lithology, influences the distribution of PHC in the subsurface.

Table 2 summarizes common types of petroleum sites and general features of each that may be related to the potential for PVI. The site type examples detailed in Table 2-2 are examples of common petroleum site types and may not cover all site type possibilities or all site-specific scenarios. Components of the sites listed may not be applicable to other types of petroleum sites. The characteristics summarized in Table 2-2 are characteristics as they relate to the potential for PVI.