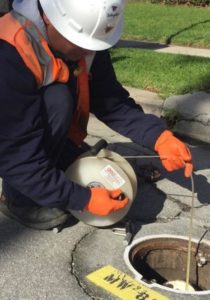 The presence of LNAPL and the characterization of LNAPL in the subsurface is often determined primarily by the measurement and observation of LNAPL in monitoring wells. It is noted, however, that the relative measure of apparent thickness of LNAPL in a well, while indicative of LNAPL presence, has been shown to be a poor indicator of the magnitude, mobility or recoverability of LNAPL in the vicinity of the well. Therefore, the investigator is encouraged to develop a thorough understanding of the LNAPL conditions.

Some of the many site-specific factors that may significantly affect LNAPL migration and recoverability are as follows:

When petroleum LNAPL is discharged onto or into the ground, it migrates downward under the force of gravity through the unsaturated (vadose) zone. As the LNAPL migrates through the vadose zone, some of it will be left behind, sorbed, trapped and immobilized in the pores by capillary forces and geologic heterogeneities. If a sufficient volume of petroleum is released, LNAPL can reach the saturated zone (capillary fringe and water table), where it will begin to accumulate and spread laterally because of its lower density and immiscibility with respect to water. Under sufficient head pressure, the LNAPL body may infiltrate the capillary fringe and effectively depress the water table. LNAPL will continue to migrate vertically and horizontally until equilibrium is reached, displacing air from pore spaces within the vadose zone and some of the water from the larger pores in the saturated zone.

After the release has stopped, the spread of the LNAPL body is spatially limited by forces that counteract the force of the LNAPL gradient including LNAPL buoyancy and capillary forces. There are two general stages in the development of the LNAPL body at the saturated zone after a subsurface petroleum release: 1) the initial, shorter duration expansion stage when the LNAPL is actively migrating under a sufficient LNAPL gradient; and 2) a much longer duration stable stage when migration is minimal to nonexistent after the hydraulic forces driving LNAPL migration have diminished relative to counteracting forces. However, if there are changes in these forces, such as water table elevation or gradient changes, LNAPL plume stability can change both horizontally and vertically. 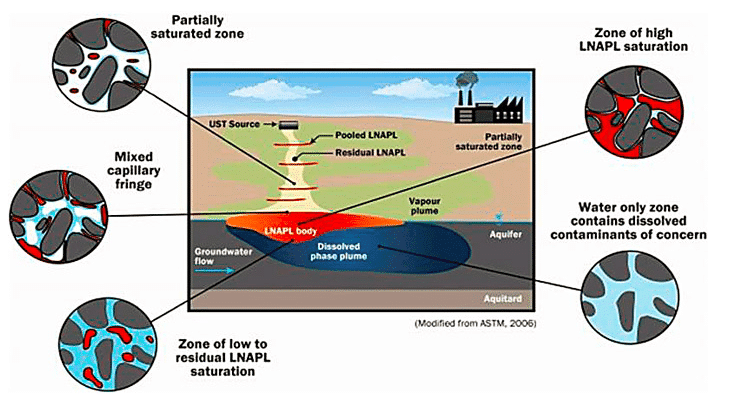 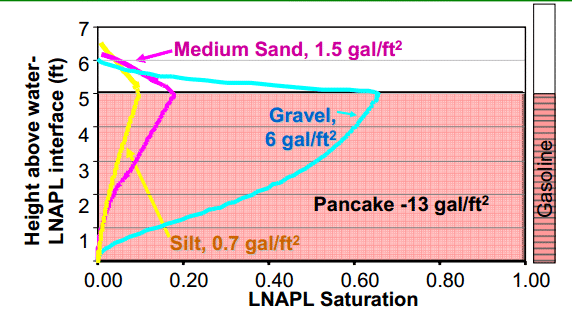 Some of the LNAPL will eventually become hydraulically isolated leaving independent globules of LNAPL differentially trapped in pores and/or geologic irregularities. Residual LNAPL saturation is defined as the LNAPL saturation under which the LNAPL is “immobile under the applied gradient”. LNAPL below residual saturation is neither mobile nor hydraulically recoverable; although the technology that changes the LNAPL physically or chemically may be capable of increasing contaminant mass recovery. LNAPL exceeding residual saturation is referred to as mobile LNAPL. Mobile LNAPL may or may not be migrating, but it is potentially recoverable in the liquid phase.

The presence of measurable LNAPL in a given collection point indicates potential mobility in the vicinity of the collection point, but it does not necessarily mean that the LNAPL body is migrating. For migration to occur at the edges of the LNAPL body, the forces that drive lateral LNAPL migration, such as the LNAPL gradient (head), must overcome the pore entry pressure. At some point at the leading edges of the LNAPL body, counteracting forces prohibit further LNAPL migration in the absence of a stronger LNAPL gradient or continuing LNAPL source. As a result, LNAPL bodies will eventually become spatially stable under prevailing conditions even though LNAPL exceeding residual saturation may remain in the core of the LNAPL body. LNAPL bodies typically stabilize after the release stops and the driving force (head) dissipates.

Figure 5. Conceptual depiction of LNAPL observed within the formation and within monitoring wells (a – e) during a variable water table and LNAPL thickness shown on the bottom graph (ITRC 2009)

The apparent thickness in the well is commonly exaggerated compared to the thickness of the mobile LNAPL interval in the formation as discussed below for unconfined, confined, perched, and fractured bedrock settings.

In fractured and preferential pathway conditions, the relationship between the potentiometric surface and fractures intersected by the monitoring well may result in exaggerated LNAPL thickness compared to the mobile interval of LNAPL in the rock. Fractured and preferential pathway conditions represent LNAPL confined in a large pore network that is defined by capillary pressure contrasts, which may include open fractures in bedrock or desiccated soils, sand surrounded by clay, and macro-ores. 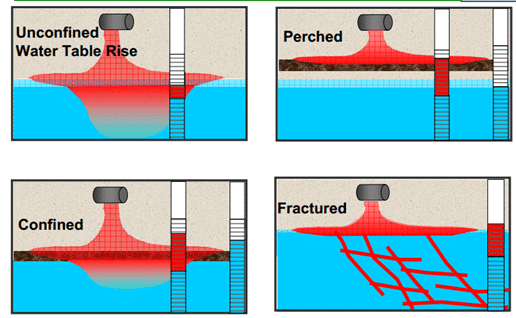 Figure 6: Scenarios of finding LNAPL in the monitoring well at different geological condition

In general, if LNAPL does not collect in properly constructed and properly located monitoring wells during periods of low water table conditions, mobile LNAPL is likely not present at the spill site, and any LNAPL present should be considered immobile residual product. If LNAPL does collect in a monitoring well, LNAPL is potentially mobile in the soil near the monitoring well, but the LNAPL plume or plume body may or may not be mobile or migrating at a site scale. Temporal gauging of monitoring wells with screened intervals bridging the water table within the LNAPL body and at the plume fringes is one of the most useful tools for determining whether mobile LNAPL is present at a site and if the LNAPL body is migrating on a site scale. 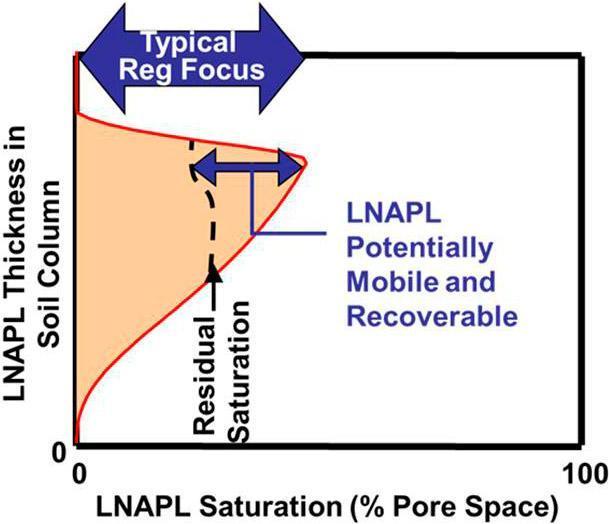 Figure 7: The residual saturation is a theoretical endpoint for pumping-based recovery systems that will not likely be achieved on a field-scale.

At petroleum release sites where an LNAPL concern exists, but it has not been directly observed, a determination of LNAPL presence should rely on multiple lines of evidence to verify or eliminate the suspected LNAPL concern. Monitoring for the presence or absence of LNAPL in monitoring wells can be helpful; however, it should not be the only assessment tool. Where LNAPL is present in a properly constructed monitoring well, LNAPL can also be assumed present in the surrounding subsurface formation. However, it is a common misconception to assume that if no LNAPL is present in a monitoring well, then there is no LNAPL in the soil. Similarly, if in-well LNAPL thickness changes from measurable to not measurable following LNAPL remediation, it is a common misconception to assume that LNAPL is no longer present within the surrounding subsurface soil. In both of these scenarios, LNAPL may be present in discontinuous pores at saturations less than those needed to migrate laterally or to mobilize into a monitoring well.

Table 1 lists potential indicators of the presence of LNAPL in unconsolidated materials, and more importantly, also cautions the use of indicators that should be viewed as ‘lines of evidence’ rather than absolute indicators.