Abs: Release of oils and PAHs from a petroleum processing facility soil pit caused extensive contamination at the site which was migrating to a river. A recirculation system used Klozur® (activated sodium persulfate) as the ISCO technology of choice. The remediation program also included the recirculation of fluids from the extraction well to enhance the desired groundwater flow and control chemical dispersion through the target treatment area.

MECX , LLC (MECX ) performed the first active oxidant in-situ chemical oxidation (ISCO) application pilot test at a former chemical plant located in Trento, Italy. Release of oils and PAHs from a petroleum processing facility soil pit caused extensive contamination at the site which is migrating to a river. After sixteen years of operating a soil vapor extraction and pump and treat system, the soil and groundwater continued to have NAPL contaminant levels preventing control of the migration to the river. This affect on the river has led to an evaluation for a technology that could quickly address the PAH NAPL issue and prevent migration to the river. ISCO was chosen because of its ability to rapidly desorb and dissolve mass without migration and provide for the required rapid cleanup timeframe and its cost effectiveness. A recirculation system using catalyzed hydrogen peroxide activated sodium persulfate (Klozür®) as designed and implemented by MECX was selected as the ISCO technology of choice.

The target groundwater remediation zone was located at depths from 36 to 48 feet below grade surface (bgs). The groundwater dissolved plume extends for approximately 3 miles along a drainage channel to a river. Lithology of the affected zone consisted primarily of silty clays with sand lenses. A total of 3 application wells were installed at the site in a triangle with an extraction well located in the center approximately 12 feet from each application well. Logistical challenges included delivery of chemicals and handling of chemicals at this remote location. The remediation program also included the recirculation of fluids from the extraction well to enhance the desired groundwater flow and control chemical dispersion through the target treatment area while containing the mass and prevent migration to the adjacent drainage channel. All recirculation fluids were used as makeup water for the application of the sodium persulfate and iron catalyst. 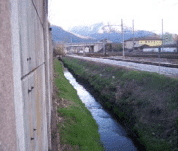 The MECX recirculation process increased the flow from a baseline of 0.25 gpm to 2 gpm with an application pressure being maintained at 10 psi. During the three day application, all NAPL was eliminated from all the wells, all odor was also eliminated and visual staining of the sediments was removed. Dissolved concentrations of all target analytes were measured after 4 weeks and found to be below action levels of less than 50 ug/l. Results of this test have resulted in the approval by the Regional Environmental Agency and the Federal Agency for continuance of the project.