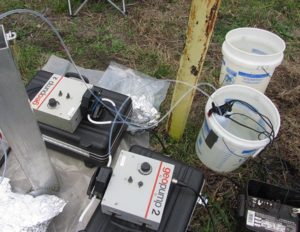 Although it is important to purge some water from most wells before collecting a sample, purging too much water or purging at too high rate can cause mixing of water from zones of different quality and, potentially, contamination of noncontaminated zones by previously localized or stratified pollutants. Purging strategies, as described in ASTM Standard D 6452 (ASTM, 2004g), are divided into two general categories: those appropriate for high-yield sampling points (points that do not go dry during purging and sampling) and those appropriate for low-yield sampling points (points that may go dry during purging and sampling).

An improved method of purging wells evolved out of research conducted to improve sample accuracy and precision and to encourage the collection of more representative samples. This method of purging is known as low-flow purging and sampling. Low-flow purging involves removing water directly from the screened interval without physically or hydraulically disturbing the stagnant water column above the screen. This is done using a dedicated pump product 1；product 2；product 3）(or by very carefully installing a portable pump) with the pump intake set at or near the middle of the screen and pumping the well at a low enough flow rate to maintain a stabilized water level in the well as determined through water-level measurement during pumping. Typically, flow rates on the order of 0.1 to 0.5L/min are used; however, this is dependent on site-specific and well-specific factors. Some very coarse-textured formations have been successfully purged and sampled in this manner at flow rates up to 1 L /min. Pumping water levels in the well and water-quality indicator parameters (such as pH, temperature, specific conductance, DO, and redox potential) are monitored during pumping, with stabilization indicating that purging is completed and sampling can begin. 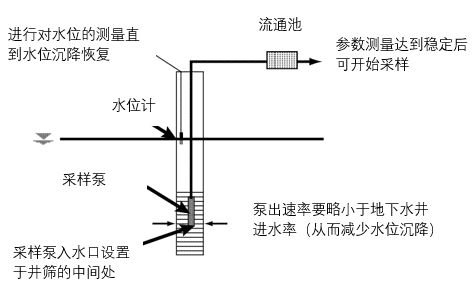 Figure 1: Illustration of the key components of low-flow purging and sampling 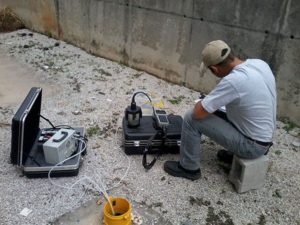 Figure 2: The equipment setup for low-flow purging and sampling includes a pump (in this case, a dedicated bladder pump); a pump controller; a flow-through cell with sensors for measuring pH,
temperature, specific conductance, DO and ORP, and a water-level gauge for measuring drawdown
during pumping.

During low-flow purging and sampling, the water level in the well is continuously monitored using any water-level measurement equipment that does not disturb the water column in the well and that has an accuracy required by the sampling program (generally +0.01 ft). Devices such as downhole pressure transducers or bubblers (for continuous measurements) or electronic water-level gauges (for periodic measurements) can be used effectively. Water-level measurements should be taken every 1 to 2 min to the point at which the water level in the well has stabilized or at which drawdown ceases. The purging rate is adjusted so drawdown in the well is minimized and stabilized (does not increase over time).

In addition to continuous water-level monitoring, low-flow purging and sampling requires continuous or periodic measurement of selected water-quality indicator parameters (product 1).The well is considered purged and ready for sampling when the chosen chemical and physical indicator parameters (commonly pH, temperature, specific conductance, and dissolved oxygen, sometimes also including redox potential [ORP] and turbidity) have stabilized, confirming that formation water is being pumped. Continuous monitoring in a closed flow-through cell of known volume generally provides the most consistent and reliable results, especially for DO and ORP, and is the preferred method of measuring indicator parameters. However, individual hand-held instruments designed to measure the most common water-quality indicator parameters (temperature, pH, and conductivity or specific conductance) or turbidity may also be used. DO and ORP measurements made after the purged water is exposed to atmospheric conditions, however, will not accurately reflect in situ conditions.

Low-flow purging and sampling is appropriate for collection of ground-water samples for all categories of aqueous phase contaminants and naturally occurring analytes. This includes VOCs and SVOCs, metals and other inorganics, pesticides, PCBs, other organic compounds, radionuclides, and microbiological constituents. It is particularly well suited for use where it is desirable to sample aqueous-phase constituents that may sorb or partition to particulate matter. This method is not applicable to the collection of either LNAPLs or DNAPLs.

On a practical basis, low-flow purging and sampling is generally not suitable for use in very low-yield wells (e.g., those that will not yield sufficient water without continued drawdown with pumping over time). There are several better alternatives to using these traditional approaches to purge and sample low-yield wells: (1) minimum-purge sampling (sometimes passive sampling) and (2) use of a device to “core” the water column in the well screen without disturbing the water column.

Minimum-purge sampling differs from low-flow purging and sampling in that while low-speed portable pumps can be used for low-flow purging, they are impractical in most situations where minimum-purge sampling could be applied. Because disturbance of the water column can result in significant mixing of the stagnant water column in the casing with the water column in the well screen, as well as the release of significant turbidity, if a portable pump is used, the pump must be set in the well long before sampling is planned. Generally, the pump must be placed far enough ahead of the time of sampling so that the effect of pump installation has completely dissipated prior to sample collection. The time required will vary from well to well, but may be in excess of 48 h. For this reason, dedicated pumps are the most practical devices used for nearly all minimum-purge sampling applications.

“Coring” the Water Column in the Well Screen: A device such as the HydraSleeve，Snap sampler（product 1）a low-cost, grab-sampling device, allows samplers to capture a “core” of water from any discrete interval within the screened portion of the sampling point without purging the well prior to sample collection. During use of this device, there is no change in water level and minimal disturbance to the water column in the well.

During purging, the purpose of monitoring field parameters is to determine when formation-quality water is available for sample collection. This is interpreted to occur whenthe selected indicator parameters have stabilized. The term stabilization must be clearlyunderstood by all samplers to ensure precision between sampling teams and to avoid over purging or under purging the sampling point. In the context of low-flow purging and
sampling, indicator parameters are considered stable when three consecutive readings
made several minutes apart fall within the ranges presented in below table.

Although not a chemical parameter, and not indicative of when formation-quality water is being pumped, turbidity may also be a useful parameter to measure. Analysis of organic analytes can be hampered by the physical presence of suspended solids, and accurate analysis of aqueous inorganics can be affected by stripping of cations, particularly metal species, from the surfaces of suspended clay particles by the sample preservation process (i.e., acidification). Turbidity measurements should be taken at the same time that chemical indicator parameter measurements are made or, at a minimum, once when pumping is initiated and again just prior to sample collection, after chemical indicator parameters have stabilized. In the context of low-flow purging and sampling, the stabilization criterion for turbidity is +10% of the prior reading or +1.0 NTU, whichever is greater.