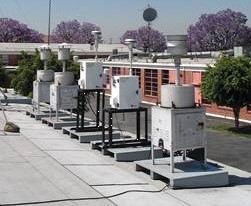 Abs: The European Union (EU) has issued a directive (2008/50/EC) which requires the monitoring of organic carbon and elemental carbon in PM2.5 at selected rural back- 10 ground sites from mid-2010 with thermal optical analysis method.

In the atmosphere of particulate matter contaminants (PM), carbonaceous material accounts for the major fraction. Carbon particles (total carbon, TC) can be divided into three categories: organic carbon (OC), elemental carbon (EC), and non-organic carbon (IC). The formation of organic carbon (OC) may be caused by the direct discharge of gas into the atmosphere, or by the condensation of atmospheric photooxidation, and the polymerization of organic organisms. In contrast, elemental carbon (EC) refers specifically to the source of carbon emissions, especially because of the incomplete combustion of carbon products, mainly including residential fire charcoal, fossil fuels used in transportation, power generation, and other industrial facilities.

In the general literature, elemental carbon and black carbon (BC), soot, light-absorbing carbon (LAC) are often mentioned and interchangeable with each other. Smoke is a product of incomplete combustion of carbonaceous fuels, which is defined as the combustion of the aerosol by the environmental industry. Black carbon is more defined by the optical properties of soot, which represents the carbon content of the absorbed light under ideal conditions. Light absorption is not strictly limited to carbon, but black carbon has a greater mass absorption cross section than other aerosol materials. As a comparison, elemental carbon represents chemical properties, such as refractory carbon, including graphite structures. The term elemental carbon is used when total carbon is gasified from the sample, and the difference between the elemental carbon and the organic carbon is the refractory property, or the result of optical detection in the thermal analysis.

The heat method utilizes the heat refractivity of the elemental carbon so that it does not volatilize in an inert atmosphere at a temperature of 700 ° C or lower. Elemental carbon can only be gasified in an aerobic environment above 340 ° C. Therefore, organic carbon can be defined as the volatile part of the first heating cycle in an inert atmosphere, and the elemental carbon is the volatile part of the subsequent heating section in the oxygen-containing mixed gas environment. However, some organic compounds can be easily pyrolyzed or carbonized in the analysis under inert mode. The formation of char will interfere with the detection of elemental carbon, making it part of the quantitative carbon element. In order to solve this problem, a photothermal analysis method has been developed in which the optical properties (scattering or refraction) of the filtered samples can be continuously monitored to correct the interference caused by carbonization of the sample.

The European Union (EU) has issued a directive (2008/50/EC) which requires the monitoring of organic carbon and elemental carbon in PM2.5 at selected rural back- 10 ground sites from mid-2010 with thermal optical analysis method. The monitoring program of the Convention on long-range transport of air pollutants (EMEP) also includes the me